This worldwide swim lesson happens at water parks around the world at 10 a.m. local time. Dollywood’s Splash Country invites swimmers of any age or ability level to take part in the lesson to become part of the Guinness World Record™ attempt. In 2014, water parks from around the world again broke the record for the largest simultaneous swim lesson, standing at 36,564 participants from 22 different countries.

“Last year’s Water Safety Day proved to be a very effective way for LeConte Medical Center and the Dr. Thomas Foundation to provide important health education to the families in our community,” said LeConte Medical Center President/CAO Jenny Hanson.  “We are continuing to partner with Dollywood’s Splash County in an effort to keep the children of Sevier County healthy and safe this summer and beyond.”

Dollywood’s Splash Country will open its gates at 9:30 a.m. to allow Water Safety Day participants to begin visiting the information booths. Each participant will receive a Splash 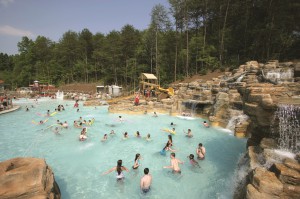 Pass upon check-in, allowing them to receive a prize at each booth throughout the water park. Once the participants have completed their Splash Pass it can be turned in for the chance to win two season passes to Dollywood’s Splash Country.

Water Safety Day and all of its partners join forces worldwide with participating aquatic facilities and water parks to take part in the sixth annual World’s Largest Swimming Lesson at 10 a.m. in 2014 Team WLSL again broke the record for the largest simultaneous swim lesson, standing at 36,564 participants from 22 different countries. Drowning is the second leading cause of accidental death of children ages one to 14. Research shows that if a child doesn’t learn to swim before the third grade, he or she likely never will. Research shows participation in formal swimming lessons can reduce the risk of drowning by 88 percent among children ages one to four. The WLSL partners with Dollywood’s Splash Country and other water parks and aquatic facilities around the world to bring this issue to light and to spread the message that swimming lessons save lives.

Water Safety Day and WLSL registration begins at 8:30 a.m. Thursday, June 18 at Dollywood’s Splash Country, front gate opens to guests at 9:30 a.m. Guests should arrive early to register before the WLSL begins at 10 a.m. Dollywood’s Splash Country admission is required to participate in Water Safety Day and may be purchased on-site or online at Dollywood.com.

Where Do We Stay?