At the 2013 Patriot Festival 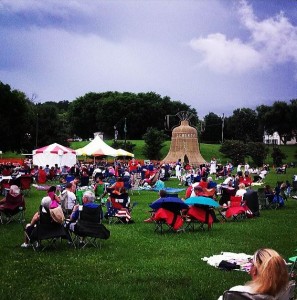 Rain and clouds tried their hardest to put a damper on Patriot Festival this year, but the crowds were strong and the event was just as fun and exciting as ever.

Hundreds were on hand at Patriot Park in Pigeon Forge to partake in the events of the festival. There were all sorts of entertainment outlets throughout the park. The main stage, which featured the musical entertainment was a happening place throughout the night with performances by several local groups, the rocking Eagles tribute band Hotel California, and of course the headlining Larry Gatlin and the Gatlin Brothers.

There were also several activities that were huge hits with the kids including waterslides, rock climbing, giant inflatable Zorb-globes and more. These stayed busy even during the rain. In fact many of the children seemed to enjoy the rainy weather more.

The food was great as there were several vendors on hand serving shaved ice, lemonade, homemade ice cream, barbecue and more. Best of all, the proceeds from these vendors helped out local non-profit organizations, which further cements Patriot Festival’s status as a truly community-first event.

Larry Gatlin and the Gatlin Brothers entertained the crowd until almost 10:00 which led to the finale of the night- the fireworks display. The rain stopped with almost perfect timing and the crowd grew to its peak as people lined the streets surrounding the park moments before the fireworks show began.

The fireworks did not disappoint. It was an extravagant display that lasted for what seemed like forever! Practically the whole city stopped to watch the gigantic explosions of color combinations which could be seen for miles around.

It was definitely a perfect celebration of Independence Day. If you’ve never been to Pigeon Forge during this time of summer before be sure to make plans for next year!