Pigeon Forge is surrounded by historical sites and landmarks and Great Smoky Mountains National Park is home to many of them. A true appreciation for the hard work and lifestyle of the mountain people can be felt with every footstep you take in this magnificent park. We’ve picked out a few Smoky Mountain historical sites that are well worth the visit on your next trip to Pigeon Forge. 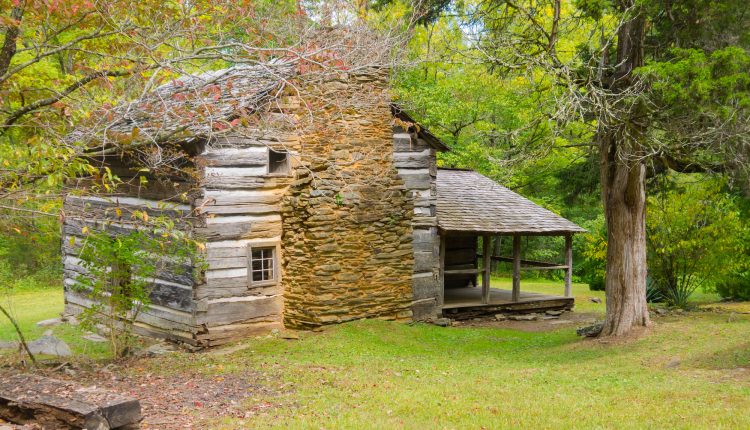 The Walker Sisters’ Cabin is a two-story, three room log cabin located in the Little Greenbrier or Five Sisters Cove area of Great Smoky Mountains National Park, that dates back to the mid 1800’s.

In 1926, when Congress authorized the park and gave North Carolina and Tennessee permission to start buying land, many families were asked to leave their homes. However, this was not the case for the six unmarried Walker sisters. They were given a lifetime lease to live out the rest of their lives in their mountain home. Although the sisters had to modify their lifestyle once the park opened, they adapted well and began selling handmade items to guests.

In 1946, the sisters and their mountain way of living were featured in the Saturday Evening Post. By 1964, the last Walker sister had passed and the park assumed ownership of the land. To date, the cabin, springhouse and a corn crib still exist.

Getting There: The best way to get to the Walker Sisters’ Cabin is to park at Metcalf Bottoms and hike about a 1 1/2 miles up the Little Brier Gap Trail. From Sugarlands Visitor Center, drive 10 miles to reach the Metcalf Bottoms Picnic Area. The Little Greenbrier Schoolhouse, which the Walker family also helped build, can be seen along the way. This schoolhouse, as well as the Walker Cabin and surviving structures on site, are listed on the National Register of Historic Places. 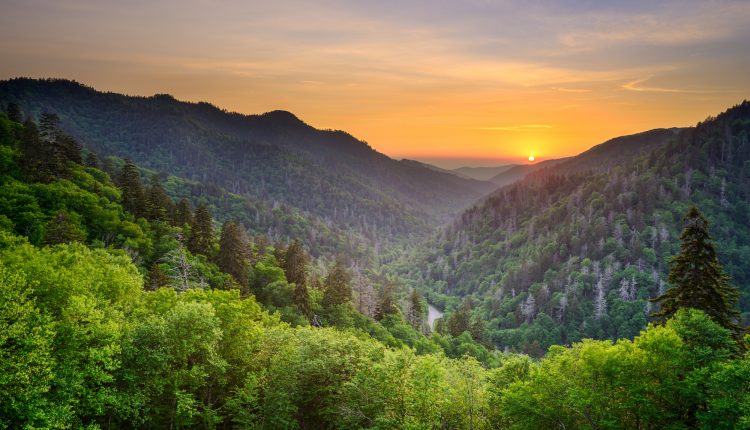 Newfound Gap is the lowest pass through Great Smoky Mountains National Park. The elevation of the evergreen woodlands of Newfound Gap are nearly a mile high, which means temperatures are cooler and chances for snow during the winter months are higher.

One of the highlights of Newfound Gap is the Rockefeller Memorial, which is amidst the Tennessee-North Carolina state line, and the location where Franklin D. Roosevelt dedicated Great Smoky Mountains National Park in September 1940. That ceremony dedicated the park as a national park that was open for everyone to enjoy. And the park has now come to be the most visited national park in the U.S.

Getting There: The Rockefeller Memorial is located at mile 14.7 along Newfound Gap Road. It’s best to start this driving tour from Sugarlands Visitor Center where driving tour booklets are available for purchase. 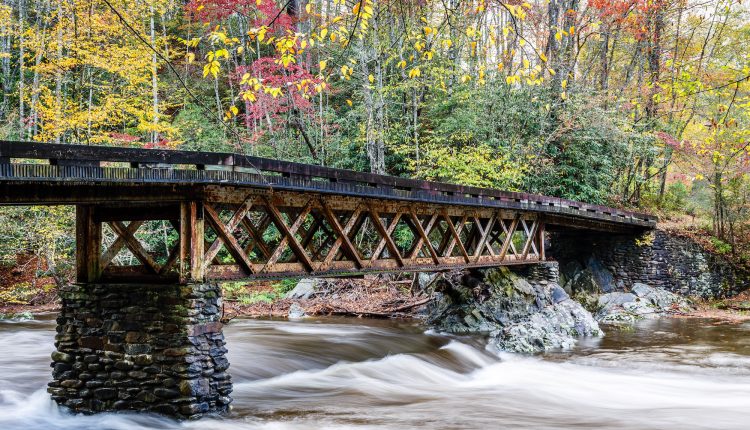 The Elkmont area showcases the remains of a once thriving logging community and two well-known resorts. It sits near the largest campground in the national park, Elkmont Campground.

The area was formally established in 1907. The Little River Lumber Company bought land and built a railroad between Elkmont and Townsend and eventually on to Knoxville to transport logs to be processed for the logging industry. In 1910, the town continued to grow as The Little River Lumber Company sold 50 acres of its land to the Appalachian Club. They built a hotel and sold cabins and cottages to members of their social club. In 1912, another man bought land from the lumber company and built the Wonderland Club.

Tourism began to grow and flourish in the area. However, in 1925, the railroad was dismantled and logging ceased in the area causing it to become more like a ghost town. When the Great Smoky Mountain Park was established in the 1930’s, the Elkmont area was actually exempted from the signed deal. The two social clubs continued to operate but the Wonderland Club became more of a hotel.

The Civilian Conservation Corps (CCC) had moved into the area to develop the park, but when they closed down camps in 1936, business in the area started to die off. In 1994, the National Register of Historic Places added Elkmont. The national park then started to make plans to preserve the remains of the Elkmont area including 17 cabins and the lodge from the Appalachian Club.

There is a sign that marks where the Wonderland Hotel originally stood, before its collapse in 2005. From the Jakes Creek Trail and the Little River Trail, you can see the cabins that are still standing today and a couple that have been restored, as well as the remains of several others.

Getting There: To see the historical sites at Elkmont, go past Sugarlands Visitors Center towards Cades Cove and about 7 miles down, turn at the sign for Elmont Campground. Once you pass the ranger station about 4 miles down, take a left at the sign for Elkmont Nature trail, where you’ll find a parking lot that is within walking distance of many of the old cottages. Cades Cove is one of the most popular places to visit in the Great Smoky Mountains of Tennessee. The best way to tour Cades Cove is by taking a scenic drive along Cades Cove Loop Road, an 11-mile one way loop road that surrounds the valley area. Its also where the widest variety of historical sites and buildings in Great Smoky Mountains National Park can be found. Along the winding road, there are three historic churches, several log cabins, barns and even a working gristmill.

Cades Cove is also one of the best places in Great Smoky Mountains National Park for wildlife viewing. The park is home to a huge variety of wildlife including deer, racoons, turkeys and black bear. There are also several hiking trails that begin from the cove, such as the trail to Abrams Falls and the Cades Cove Nature Trail.

Getting There: Take the Parkway past the Sugarlands Visitor Center and then turn right onto Little River Road. The road dead ends at the entrance to the loop, about 25 miles down. Pick up a self-guiding auto tour booklet at the Cades Cove Loop Road entrance and then travel around at your own pace to explore the area.

Make plans to visit these historical sites in Great Smoky Mountains National Park on your next visit to Pigeon Forge!

Last Chance for a Summer Family Vacation to Pigeon Forge

Stacy Giles Nov 28, 2022
Ready or not, here comes Santa! Here are some of the best places around Pigeon Forge to see, meet and get photos…
Shows & Entertainment

Guide to Christmas in Pigeon Forge

Things to Do During the Holidays in Pigeon Forge