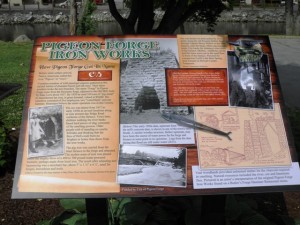 We’ve had some exciting news in Pigeon Forge recently! Today was the unveiling of a beautiful new historical marker near the Old Mill marking where the old Iron Works was.

A crew of archaeologists from the University of Tennessee also came recently to dig underneath the Old Mill in an effort to find remains of the forge that gave Pigeon Forge its name!

City Manager Earlene Teaster, Mayor David Wear, and representatives from the Pigeon Forge Public Library Marcia Nelson and Veta King were all on hand at the unveiling of the historical marker. This marker is the first of many which are planned to eventually become part of a historic driving tour in Pigeon Forge. Numbered signs will be placed at other historic locations and will correspond with information in a tour brochure. The next historical markers will mark the sites of historic Fort Wear and the Pigeon River Railroad Depot.

“It is the wish of the library staff to bring to life our past through these markers.  We hope that residents and visitors will find depth to the town as pioneer stories are shared,” said Veta King, who managed the project.  “These stories have a place in this bustling town of activity so that people can know the origins of Pigeon Forge.”

Capturing a Piece of the Good ‘Ole Life

Hike to the Giant Poplar in GSMNP