In celebration of National Travel and Tourism Week 2017, we’re shining the spotlight on Pigeon Forge employees and recognizing them for their excellent customer service!

Meet Johnny Baker, Group Sales Coordinator at Ole Smoky Moonshine who was nominated by Will Perkins. 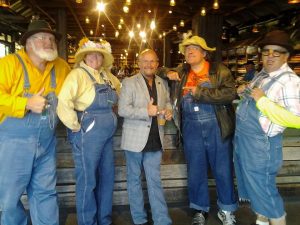 “What makes Johnny “Bootlegger” Baker a “Shining Face of Travel”:

Johnny is a shining face of travel because he is a true difference maker for the tourism industry in Pigeon Forge and the surrounding areas. Being a “true local” and possessing true local flavor, Johnny is much more than just a liaison for the many groups of people that he tours in the area, he is an event and attraction in himself. Johnny offers up a unique flair all his own in his efforts to draw groups of people to want to see more at travel showcases and seminars throughout the country. His efforts and style benefit not only Ole Smoky Moonshine, the company he works for, but all businesses and attractions in the area who then get to showcase their own qualities to visitors.

Johnny’s efforts do not stop at his selling someone on the fun that they will have if they visit the area but Johnny truly follows through with his promise. He is dedicated to ensuring that all groups as a whole and the individuals who make up those groups receive only the best in entertainment, education, history, and local values.  I have personally known Johnny to work day and night for weeks on end so as not to let one person miss out on his personal touch with the best experience possible. Johnny has entertained guests from South America, Australia, Europe, throughout North America and even those of us from right here in Pigeon Forge. I think this is truly one of his strong points: He makes us all as ambassadors of this area strive to do better through his own personal hard work and effort. Those of us who know Johnny are always happy to be in his presence due to his “SHINEing” personality and face and because of this he makes us all better in our part of the tourism industry. 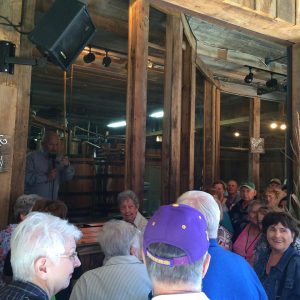 It would be impossible to overlook the personal efforts of Johnny in helping to keep tourism alive after the devastating fires that took place in the area in November. After fires had swept the area and travel to the Smoky Mountain region sounded like it was not an option to all the world, Johnny worked tirelessly in many ways to help alleviate the strain on the locals in the area and also to help make sure that the flow of tourism would not wane. Johnny worked selflessly in shelters and supply areas to soften the initial blow of the losses sustained by locals. In the meantime, Johnny also put his infectious personality to use in helping to procure outside help for the disaster. The relationships that Johnny has created through his work in the area and industry were on display when he was able to reach out to Zac Brown to ask for help. Zac, no doubt was willing to help on his own but I truly believe that it was the personal touches that he has received from ambassadors in our area, particularly Johnny Baker that really made the disaster hit home even from a recording star from Georgia. Johnny was instrumental in getting representatives from Zac Brown to set up a food service on the grounds of Rocky Top sports complex to help feed first responders, volunteers, and victims of the fires. Of course the aid culminated in The Mountain Tough concert headlined by none other than the Zac Brown Band which was in many ways an unofficial re-opening of Gatlinburg to visitors and tourism and helped to raise large sums for the fire recovery effort.

Those who know Johnny know that he is practically indescribable without a live encounter. Indescribable is a word that could also be used for his invaluable service to the tourism industry in this area through his “Shining Face” and his infectious touch on us all.”