The highest point in Great Smoky Mountains National Park will again be accessible by road starting March 31st with the opening of Clingmans Dome Rd. At 6,643 feet above sea level Clingmans Dome is the highest peak in the state of Tennessee and the third highest east of the Mississippi River. 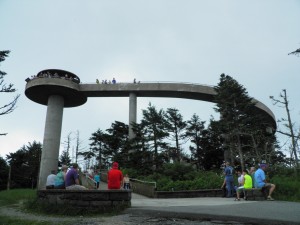 The observation tower at the peak is open year-round but is only accessible by road from March 31 through December 1. Winter in the Smokies, specifically at such high elevations, often makes driving conditions too dangerous to keep the road open. The seven mile road is accessed off of US 441 near the Newfound Gap parking lot.

You’ve probably heard of the adelgid species of insect that have been killing many of the fir and hemlock trees. These invasive species have caused considerable damage to the peaks of the Smokies, and many dead trees are left standing bare on Clingmans Dome. The National Park Service has put forth several initiatives to stop the insects and help preserve these trees.

Once you reach the top, you’ll notice the paved walking trail that leads about a half-mile to the observation tower. This tower provides some of the most spectacular 360° views in the nation. If the air pollution is low and clear views are available you can see over 100 miles. Weather is often also a problem for views as the entire peak can often be shrouded in clouds. If it’s a clear day you can likely spot Pigeon Forge to the north. To the south you might be able to spot sections of Fontana Lake in North Carolina.

Several trails intersect at Clingmans Dome, including the famous Appalachian Trail. Hiking is the only way to access the tower as bikes are not permitted on the paved trail. Take advantage of the reopening of Clingmans Dome road and plan your visit to one of the most unique places in the Smoky Mountains!

“Quiet Walkways” and Nature Trails in the Smokies