A scenic drive along Cades Cove Loop Road in Great Smoky Mountains National Park is a must-do during your Pigeon Forge vacation. The Cades Cove area is one of the most beautiful and most popular spots in the park to take in the scenic mountain beauty while also learning some of the area’s history. Cades Cove Loop Road is an 11-mile one-way paved road that loops around the lush and scenic valley. 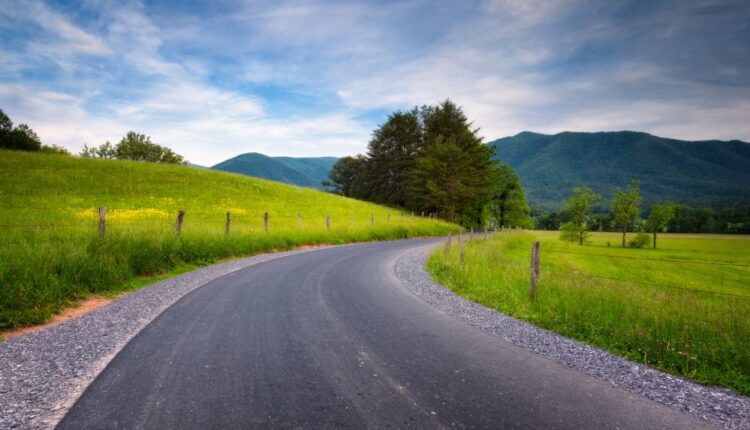 European settlers began arriving in the area sometime between 1818 and 1821. Over a hundred families would call the cove home until the National Park movement began in the 1920s. In 1927, eminent domain was passed, which seized all the properties included within Cades Cove. The area would become part of Great Smoky Mountains National Park, which was dedicated in September 1940. A few structures from these early settlers have been preserved and are open for visitors to explore and take in the rich history.

During your scenic driving tour along Cades Cove Loop Road, keep an eye out for wildlife. From raccoons to white tail deer to black bears and more, Cades Cove is home to a diverse array of animals. 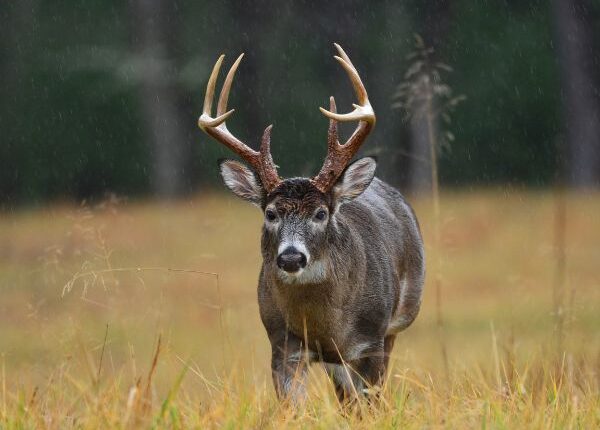 Use this guide to find all the historic sites and buildings that are accessible along the path. We’ve also included a Google map, which you’ll find below, to make navigating your way around and along the Cades Cove Loop Road a breeze.

Things to Do Along Cades Cove Loop Road 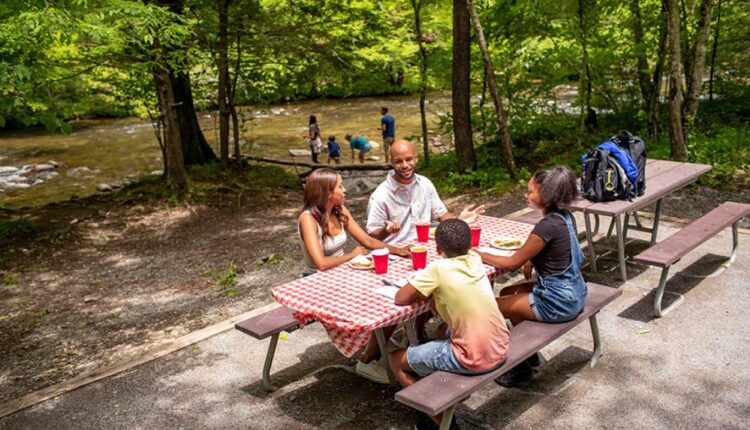 After entering Cades Cove, you’ll pass by the Cades Cove picnic area and campgrounds. Just before you enter onto the one-way Cades Cove Loop Road, there is a shelter where park rangers and staff are on hand to answer any questions you might have before embarking on your journey. After hiking 1.4 miles, the trail passes by the John Oliver cabin, which is the first historic homesite you will also reach by staying on Cades Cove Loop Road. At 2.9 miles, hikers will reach the junction with Indian Grave Gap Trail. At the next junction, hikers will continue along the Crooked Arm Ridge Trail to descend Rich Mountain and reach the Rich Mountain Trail Loop again. This somewhat strenuous hike is a total of 8.5-miles. 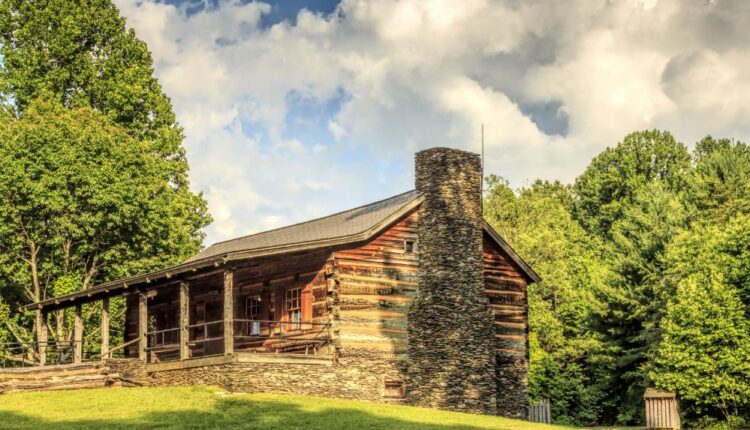 In the early 1800s, the Cherokee gave up their land in Tennessee which included the cove. The first white settlers to arrive in the cove were John and Lucretia Oliver. The couple spent their first few months in an abandoned Cherokee hut, followed by a temporary home and eventually a cabin of their own. The John Oliver cabin was the first permanent home in Cades Cove. It’s also the first historic building you’ll see after entering Cades Cove Loop Road. 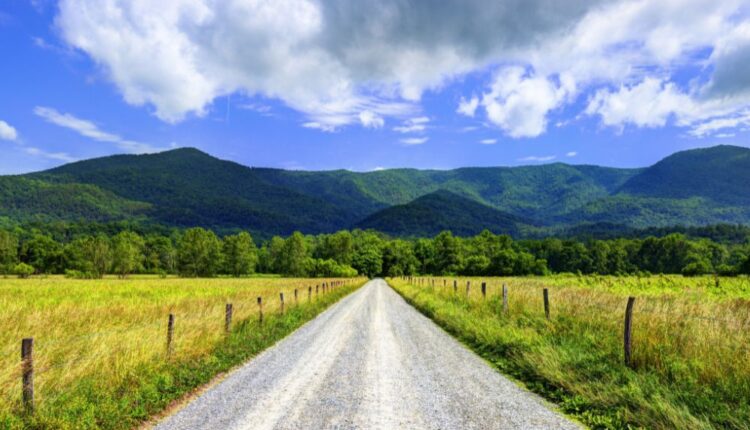 Two additional routes found along Cades Cove Loop Road that are open to visitors include Sparks Lane and Hyatt Lane. Both roads cut through the center of Cades Cove and are useful if you run short on time and need to head back or for taking in even more beautiful views of the area. Sparks Lane is the first road that you’ll pass after entering the loop. 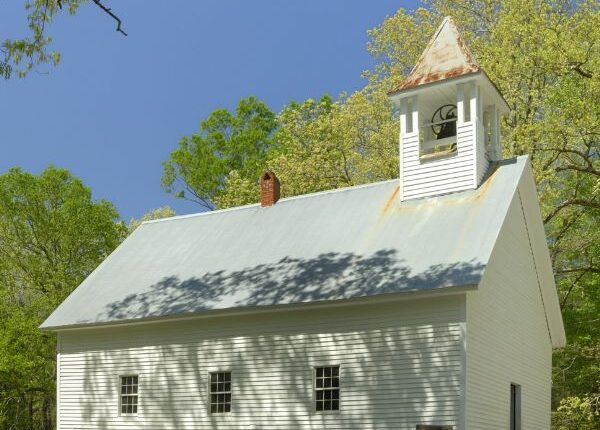 As the population continued to grow in Cades Cove, the need for schools and churches arose. The Primitive Baptist Church was founded in 1827. A disagreement over interpretation of biblical matters resulted in the Baptist congregation being split up, and other groups formed. 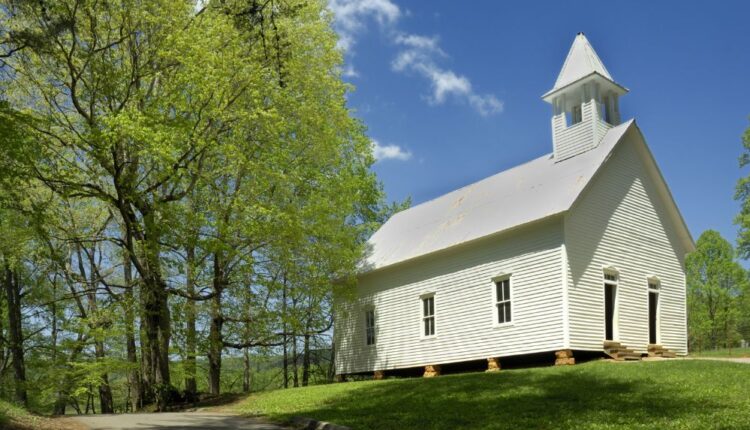 Also active during the 1820s, were the Methodists. Church goers met in a log building up until the Methodist Church was built in 1902 by J.D. McCampbell. 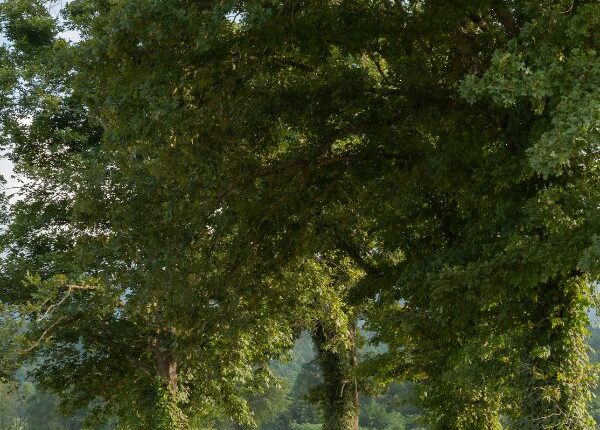 Hyatt Lane is the second of the two roads that cut across Cades Cove. This road is named after Shadrach Hyatt who settled down in the cove with his wife and 11 children. A group that was expelled from the Primitive Baptist Church formed a church of their own to focus on missionary work. The missionaries spent years meeting in family homes until the Missionary Baptist Church was constructed on Hyatt Hill in 1839. The church was rebuilt in 1915. 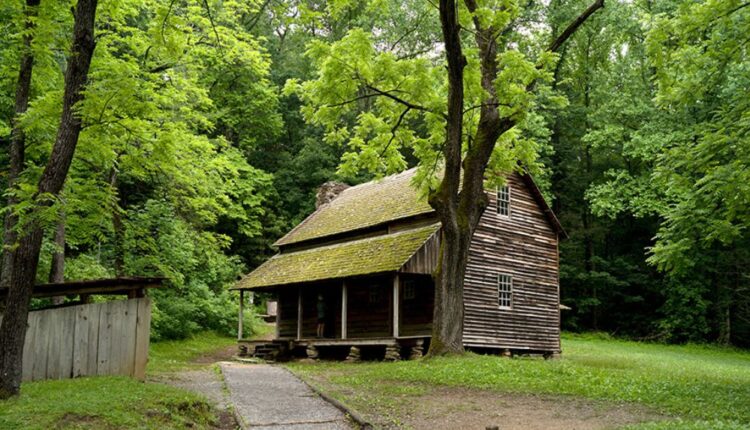 The son of John Oliver, Elijah Oliver, is the next historic home that can be found along Cades Cove Loop Road. Elijah had moved out of the cove when the Civil War started but returned afterward to the log cabin now known as the Elijah Oliver Place. 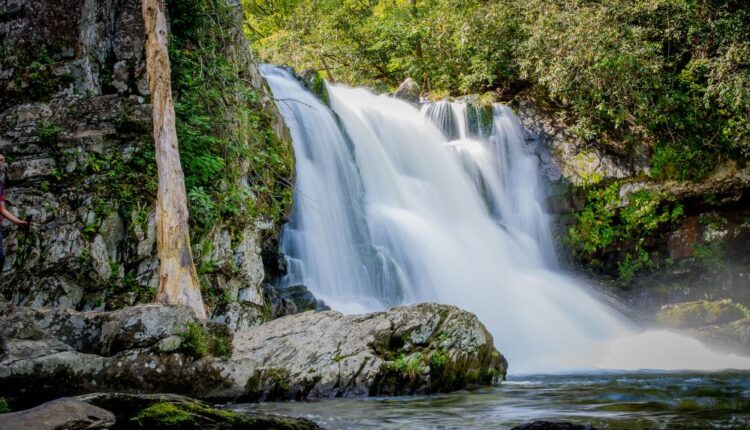 The trailhead for the Abrams Falls trail is located just past the Elijah Oliver Place. The trail is one of the most popular waterfall hikes in Great Smoky Mountains National Park. Although the falls stand only about 20-feet-high, the massive volume of water that rushes over the rocks is truly an incredible sight to behold. The slightly moderate hike to Abrams Falls from the loop is a five-mile round trip. Once there, visitors can relax in the beach area at the base of the falls and take in the beauty. 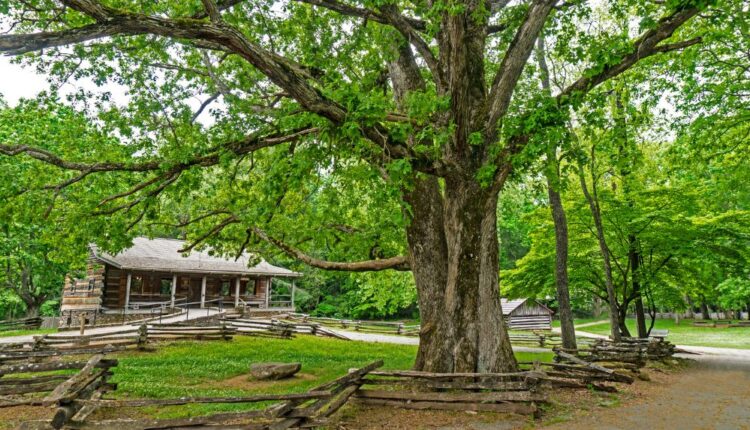 The official center for the National Park Service in the area is the Cades Cove Visitor Center. It’s a great spot to stop and browse for Cades Cove souvenirs and just about anything else you might need. The Cades Cove Visitor Center is in the Cable Mill area near the John P. Cable Grist Mill. Whole wheat flour and cornmeal that was processed by the mill can be purchased at both locations. You’ll find restrooms available here as well. 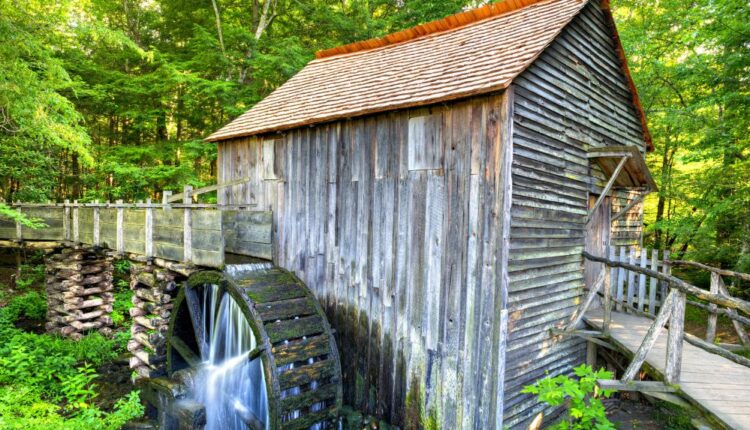 The John P. Cable Grist Mill is your next stop after the Cades Cove Visitor Center. The mill is the only working gristmill in the Smoky Mountains. The area is home to several other historic home sites and buildings that include a barn, smokehouse and blacksmith shop. 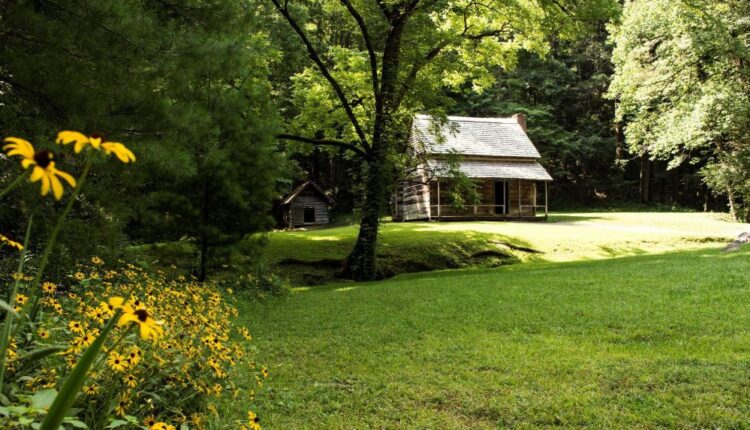 The Henry Whitehead home is one of the roughest, yet finest, in Cades Cove. It is one of three transition homes that were built in Cades Cove. The home’s architectural style is a unique blend of the traditional log home and frame home style, which were authentically constructed of sawed lumber. The Whitehead home is the last remaining residence of this traditional style. 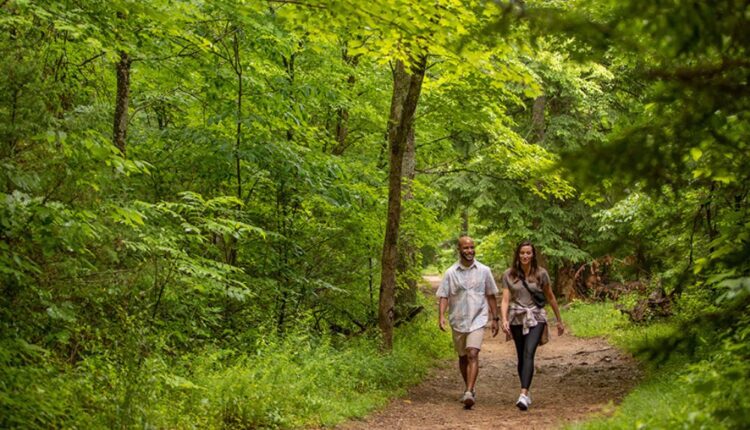 The Cades Cove Nature Trail is a scenic 2-mile path, located about one mile beyond the Cades Cove Visitor Center. It’s the perfect trail for the whole family to get out and stretch their legs while enjoying the scenic beauty of the area. The trail is a great spot to see spring and summer wildflowers in bloom. 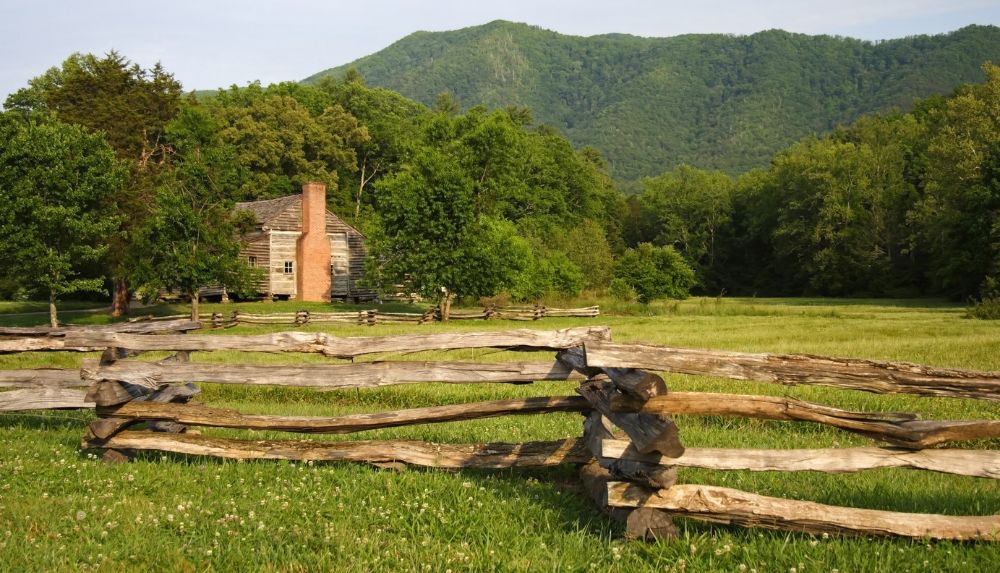 The Lawson house was built in 1856 by Dan Lawson. The chimney is made of bricks that were all made in the cove. 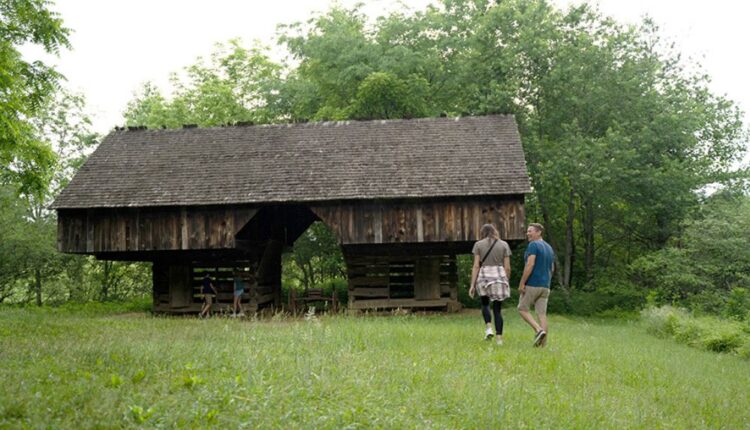 The Tipton house was built in the early 1870s. The two daughters of Colonel Hamp Tipton lived in the house and were teachers at the school in Cades Cove. The cantilever barn located across from the Tipton place is one of the most unique historic buildings found in Cades Cove. The barn is a replica of the original structure that once stood. 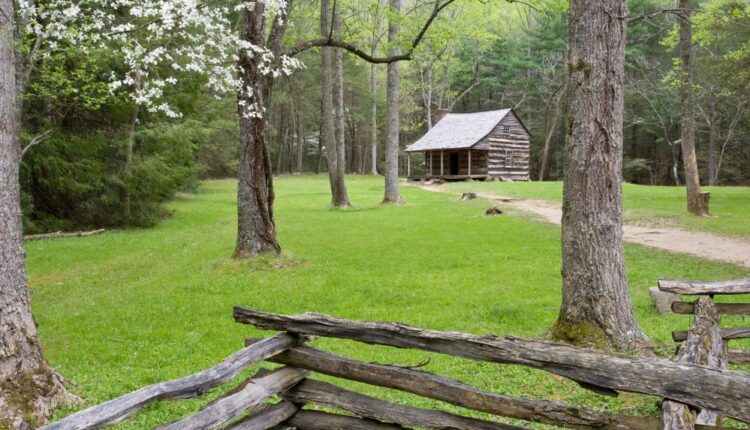 The last stop along Cades Cove Loop Road is the Carter Shields cabin. The cabin was once home to Civil War veteran George Washington ‘Carter’ Shields.Shields was wounded during the battle of Shiloh and returned to the area, living in this home for the next 11 years.

Open every day except Christmas Day.

Each Wednesday, the National Park Service has initiated vehicle-free access along the Cades Cove Loop Road.

Cades Cove Loop Road will be closed to all motor vehicles each Wednesday from May 4 – September 28, 2022 to provide for pedestrian and bicycle use.

Getting to Cades Cove Loop Road

From Pigeon Forge, follow the Parkway until you pass Sugarlands Visitor Center. Turn left onto Little River Road and continue 25 miles until you reach the entrance of Cades Cove Loop Road.

Great Smoky Mountains has several ongoing road and trail construction or repair projects occurring which may cause delays or prevent access. Please check out our temporary closures & alerts page for updates, click HERE.

Wildlife Safety Tips for Your Outdoor Vacation in the Smoky Mountains

Best Spots for Capturing Fall Foliage in the Smoky Mountains

Things to Do in September in Pigeon Forge